From 28th March to 9th April 2022, the 15 ESRs met again for two weeks in Pisa at Scuola Superiore Sant’Anna (SSSA) for their third training module of the LeADS project. Whereas the first training modules in Novembre-Decembre 2021 involved mainly the discussion of subjects related to computer and data science, this training module focussed on the legal perspective.

The cross-interdisciplinary training program for the 15 ESRs constitutes a fundamental part of the LeADS project. Being capable to fully understand the challenges posed by the digital transformation and data economy requires knowledge in different fields such as computer science, law, or economics. The LeADS training program is therefore structured around six modules that together aim at training a new generation of researchers as Legality Attentive Data Scientists that become experts in both law and data science capable of working within and across the two disciplines.

Training Week 1: Digitalisation, the Law and Challenges Related to its Enforcement

The first week began with a research design course on how to assess the societal relevance of research questions taught by Madeline Polmear from Vrije Universiteit Brussel (VUB). The following lectures were marked in particular by introductory courses to EU and international law for non-experts to level the playing field between lawyers and computer scientists in the group. Fryderyk Zoll from Jagiellonian University (JU) introduced the researchers to EU anti-discrimination law and how it translates into legislation that prohibits, for instance, unjustified geo-blocking to prevent discriminations based on customers’ nationality or their place of residence. A more general introduction to international and European protection of human rights was given by Paul De Hert (VUB). In addition, an introduction to human rights theory and how human rights law developed since the creation of the first international instruments, De Hert gave an outlook on possible new fundamental rights that might emerge in the digital era.

Gloria González Fuster (VUB) zoomed into the regulatory framework that surrounds a fundamental right that is of particular importance for the LeADS project: the right to data protection. In her engaging presentation she gave a short overview on the history of the right to data protection and presented both the key players (data subjects, data controllers & processors, data protection authorities) as well as the main data protection principles that lie at the heart of the protection regime of the GDPR. Vagelis Papakonstantinou (VUB) introduced the researchers to another important branch of law in the context of digitalisation: cyber security law. In his lectures he presented EU law and policy with a particular focus on legislative instruments such as the NIS directive or the EU Cybersecurity Act.

Besides various introductory lectures to different fields of law, the researchers had the opportunity to gain practical insights into enforceability of technological regulation in the EU, thanks to the intervention by Anotonio Buttà, chief economist at the Italian competition authority AGCM (Garante della Concorrenza e del Mercato). He elucidated how the competition authority had to set up a diverse team of computer scientists, data scientists, economists, and lawyers in order to address challenges and identify collusive and discriminatory practices in an environment characterized by the implementation of new technologies like machine learning algorithms. 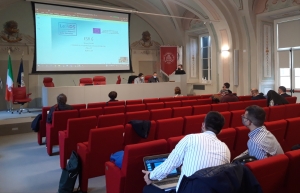 ur crossroads of the LeADS project (1. Privacy vs Intellectual Property 2. Trust in Data processing & Algorithmic Design 3. Data Ownership 4. Empowering individuals), i. e. challenges that still need to be addressed in data-driven societies. Since all ESRs are placed in beneficiary institutions in six different countries, the meeting in Pisa constituted a valuable opportunity to discuss and give meaningful feedback in person on each other’s research. The first training week ended with the mid-term meeting where the general advancement of the LeADS project was discussed together with the project officer from the European Commission and where the researchers had the opportunity to present themselves and their individual research.

Training Week 2: The Law and Challenges Posed by New Technologies

During the second training week Giovanni Comandé (SSSA) ensured that the perspective would not only remain interdisciplinary but also cross-cultural, by introducing the researchers to American and Chinese approaches to privacy. The international perspective was maintained in the class by Maria Gagliardi (SSSA) who presented the complex rules of the GDPR that apply to international transfers of personal data.

Furthermore, Giovanni Comandé explained how new computing capabilities and processing technologies transformed us into a networked, data driven, classifying society, where data is increasingly being exploited and used, for instance, to make predictions about individuals’ future actions and to increasingly employ nudging techniques that impact our decision-making behaviour. Questions that will have to be dealt with would therefore concern the frontier between techniques that merely support the decision-making process versus techniques that coerce somebody to take a specific decision. Arianna Rossi and Marietjie Botes from University of Luxembourg (LU) further elaborated on this topic by introducing dark patterns and ethics of online manipulative behaviour. 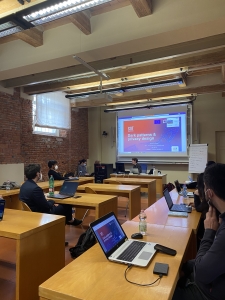 Gianclaudio Malgieri (VUB) elucidated how big data and AI technologies have created new risks for data subjects since discrimination would be possible based on new “affinity profiling” characteristics. The AI ecosystem would thus lead to layers of vulnerability based on specific contexts.

Caterina Sganga (SSSA) presented in her lecture how AI technology challenges the regulatory framework of intellectual property – would it be possible to conceive machines as an inventor or author and what happens if AI agents infringe IP rights?

Finally, one of the latest legislative proposals, the AI Act, was presented in detail by Giovanni Comandé and enabled discussions on how EU policy attempts to respond to challenges posed by new technologies.

The next training module in June 2022 will take the ESRs to Greece where, in addition to courses in data management and analytics, the ESRs will have the possibility to present and discuss in detail the findings of their research which they have gathered within the first months of their participation in the LeADS project.