From the 14th to 23rd of September 2022, the 15 ESRs met again for their fifth and final training module. This time they had the chance to meet in the beautiful city of Kraków at Jagiellonian University which is one of the seven beneficiaries of the project. The LeADS training program is structured around several training modules that together aim at training a new generation of researchers as legally attentive data scientists that become experts in both law and data science capable of working within and across the two disciplines. Whereas the fourth training module in Crete focussed on the computer scientist perspective, this training module focussed again more on the legal perspective.

Training Week 1: On Data and Ownership

The first week kicked off with issues surrounding propertization of information. Ewa Laskowska-Litak from Jagiellonian University introduced the ESRs to existing legal regimes as well as technical solutions that can provide legal or de facto protection to data. Dariusz Szostek and Rafał Prabucki introduced the ESRs to benefits and risks of blockchain as an opportunity for privacy and intellectual property rights. Furthermore, Adrianna Michałowicz presented and discussed current approaches of two key deliverables from the European Strategy for Data: The Digital Governance Act as well as the Data Act and how they reflect the latest European approach to data governance. Marietjie Botes from Luxemburg University presented legal approaches to ownership and how prior to the European Strategy for Data the Commission reflected on introducing new property rights in machine-generated non-personal data. 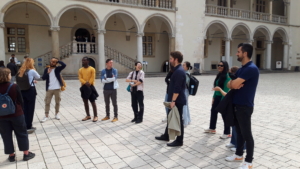 ESRs on their first day in Kraków

Katarzyna Południak-Gierz from Jagiellonian University focussed her presentation more on the consumer perspective and how personalisation techniques (e. g. behavioural or contextual tailoring) are used on them online. Together with Fryderyk Zoll, the ESRs had the opportunity to discuss the methodology of legal research and difficulties they have encountered throughout their first year of research. A completely different topic was subsequently presented by Katherine Lee, research engineer at Google Brain. In her talk on language models, i. e. models that learn a probability distribution of a sequence given the previous tokens, she elaborated on how they are trained with data as well as how they might pose privacy risk if they leak information. The first training week ended with a session by Marietjie Botes on discrimination and debiasing of algorithms.

Training Week 2: The Next Steps of the LeADS Project and Conference on Human Rights Centred AI

Week 2 kicked off with a session by Arianna Rossi from Luxemburg University on ethical and legal aspects of social media data mining from a researcher’s perspective. In her lecture on transparency and algorithmic decision-making, Agnieszka Jabłonowska focussed on transparency, its promises as well as its shortcomings. Using the example of consumer law, she discussed with the ESRs the efficiency of newly imposed transparency obligations on online platforms with regard to the disclosure of ranking parameters. Looking at the concrete example of a platform where consumers can reserve hotels, the group concluded that in its current implementation the imposed transparency obligations might not achieve their goal of informing consumers on why certain offers are ranked above o thers. An IP law perspective was adopted in the following lectures. Michał Wyrwiński explained approaches to “Protection of Image” in different jurisdictions. Furthermore, Żaneta Zemła-Pacud and Gabriela Lenarczyk discussed approaches to propertization of information in life sciences and to what extent the IP system already provide control over data. 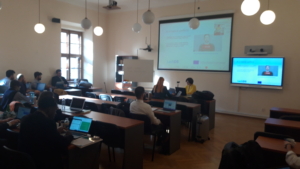 Patricia Thaine adopted again a more technical perspective in her presentation on privacy enhancing technologies such as differential privacy or synthetic data. Mohamed Ali Kandi from Toulouse University introduced the ESRs to the fundamentals of networking, e. g. by presenting to the researchers the technical structure ‘behind’ the internet. Claudia Castillo Arias from INDRA, one the LeADS partners that is closely involved in LeADS activities, provided ESRs with insights into their business activity in her lecture on Military operations planning: difficulties and challenges. On Wednesday 21st, all ESRs attended the conference “Designing Human Rights Attentive AI – An Interdisciplinary Perspective” co-organized by LeADS and LiderLab of Scuola Superiore Sant’Anna. The conference perfectly reflected the interdisciplinary approach of the LeADS project with diverse presentations on topics such as “Can we trust Fair-AI?” (Salvatore Ruggieri – University of Pisa), “Ethical and Legal Issues in Accessing Biobank Data to develop AI tools” (Andrea Parziale – Maastricht University) or “Explaining AI in Cyber Defence” (Marco Antonio Sotelo – Indra). 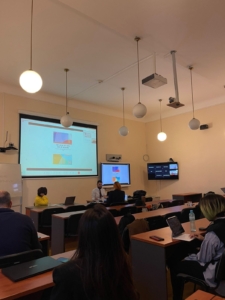 On the day after the conference, ESRs and beneficiaries of the LeADS project met to discuss and evaluate the overall progress of the project. The training in Kraków constituted the last training module for the ESRs. The next time, the ESRs will come together in December in Toulouse for the Technical innovations In Law Laboratories (TILL) workshop, where they will work on challenges that the non-academic partners of the LeADS project are confronted with in their business activity.